By M.V. Muhsin
A more determined romantic is hard to find. He totally immerses himself in his mission. And his vision compels him to win any prize he sets his eyes on. He has two heartthrobs. His wife Yehali (plus the kids) and the other… cricket! The affair started when she was at the Hillwood College hostel in Kandy.

The school’s conservatism made it near impossible to permeate the purdah-like restrictions which were imposed on boarders, especially with the Trinity campus not being too far away. Trinitians would unsuccessfully feign the “sister-brother school” relationship to gain entrance! 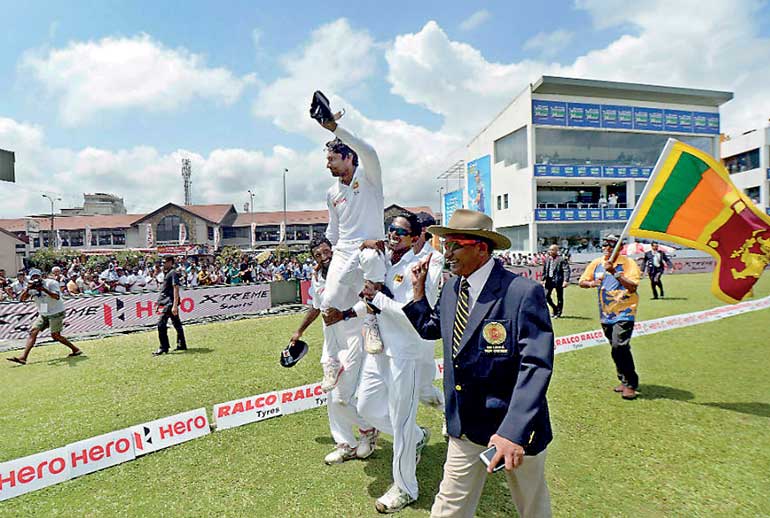 Even at that time Kumar knew how to spot the gaps, and they would meet somehow, somewhere! And then she had to move to Colombo while Kumar remained in Kandy. That did not deter him. Those were days in his ‘A Level’ years when the students were less regimented at Trinity.

He would ostensibly leave his home at Louise Peiris Mawatha very early in the morning, dressed in starched white school uniform after seeking blessings from his parents.
And then the diversion: he gets down at the Market Bus Stand and takes the Kandy-Colombo bus; gets to Colombo, spends some fleeting moments with Yehali and by noon time hits the road back to Kandy-in time for cricket practices at Asgiriya! He would plead with his Head Prefect Chandana Abeywardena: “Machan if something happens when I am in Colombo on Misson Y, cover up for me!”

If that’s not commitment to the two forces in his life, tell me what is?

He did not go looking for his other love. Soon his second love cricket came looking for him, naturally and organically. He was initially better known as a tennis player renowned for powerful backhand shots. Coach Upananda Jayasundera would marvel at his natural technique.

His father Kshena Sangakkara, Attorney-at-Law, made the introduction in pursuit of a dream that he had. Mom Kumari initially wanted him to focus on studies and not allow love-life, however defined, to interfere.

It did not take her long to relent as she saw that the son was broad-shouldered enough to multi-task, egged on by Trinity’s Principal Lt. Col. Leonard de Alwis. And the result: Kumar captained Trinity cricket, continued his tennis, and acquitted himself very well in the rounded education that the school provides. And for his distinctive leadership he ended up as Head Prefect and Best All-rounder and winner of the coveted Ryde Gold Medal.

This was also when coaches Sunil Fernando, an ex Anthonian and the renowned and revered Bertie Wijesinghe, the legendary ex Thomian and Sri Lanka cricketer, who was then on Trinity’s staff, took Kumar under their wing. Also attracted to this venture were the late T.K. Hannan, and Harold Ranasinghe who can also justifiably claim credit.

With such a battery of coaching power the electrifying current of the finest of cricket techniques flowed through Kumar’s veins. It does so even to this day. Others in these columns will ruminate and reflect more about his stellar accomplishments in world cricket. But given the current Test encounters with India what is etched in my memory is how Kumar when playing India in Colombo punished Indian bowling with a swashbuckling 90. Punished may not be the right word; hammered may be better; even better is clobbered or bludgeoned.

He scored his 50 in 46 balls, and overall notched 7 boundaries and 3 sixes off some of India’s best bowlers. His strokes had a combination of all those emotions I refer to: in how he handled the array of half volleys, the good line of length, and even the yorkers.

He cleared the ground picking his spots – with a repertoire of mighty hits, one of them in the following sequence: Boundary, Six, Boundary and Boundary ….Ouch! And yet there was no seeming brutality in the way he hit. It was with grace, well timed and with a technique that made it all look so natural!

His achievements have not gone to his head. He always talks of the “WE”. As a Captain you could see this on the field. He often consults and concedes to the advice of Vice Captain Mahela Jayawardene, and seeks at times input as needed from the likes of Murali, Mahela, Malinga and Dilshan. But he decides quickly, firmly, fairly and rightly.

It’s fair to say that many Sri Lankans come from a superstitious stock, and many speculate that Sanga’s bat was charmed! If batting was the charm that Sangakkara was renowned for, then wicket keeping was the unsung attribute that he displayed with his steely eyes and safe gloves: always watchful, ready to leap, dart, and catch and to flick the bails with dizzying speed. His unfailing ability gave so much inspiration and encouragement to the toiling bowlers. This very special combination of bat and glove defined the greatness of this player.

In a very special way one can romanticise this: the Bat and Glove were in love with each other!

As we celebrate this rare leader his unique talent is only matched by the size of his heart. In his efforts to give back to society the huge debt he says he owes, he involves himself and generously supports a host of well deserving philanthropic initiatives which also includes serving as a Global Ambassador for AIDS prevention. And to his Alma Mater he founded the Cricket Foundation.
But let’s end where we began. Here is formidable leader who has unrelenting commitment to succeed. Getting the best out of his team and motivating them is his talisman for success.

He pursued his goals with an infectious passion. And we counted on him to deliver on the destiny of his father’s dreams that only a romantic like him could. And what is more he delivered not only to Sri Lanka but to world cricket!